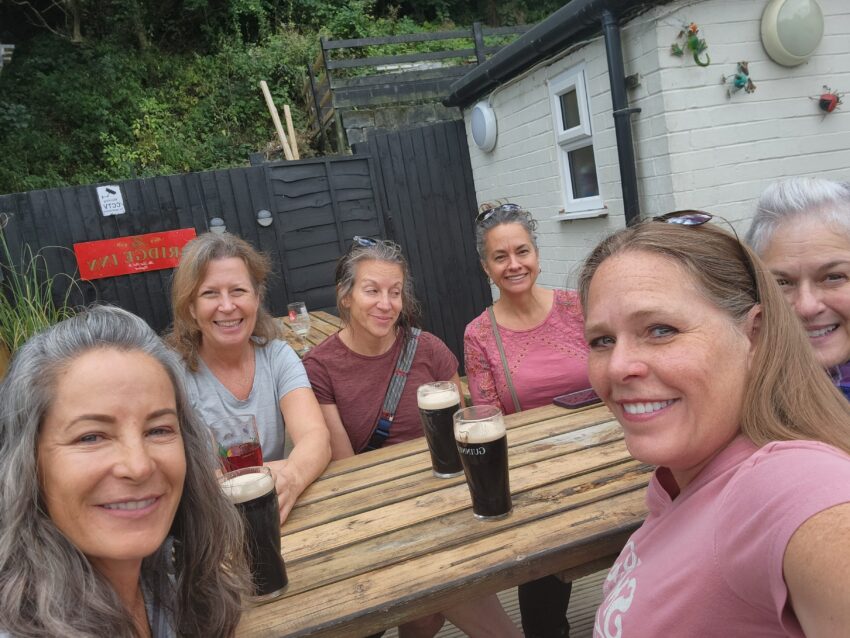 Today is the day we take possession of our Narrowboat. We ate a proper British breakfast, minus the black pudding sausage, and then wandered around Chirk for a bit. We picked up a few fruits and veggies for snacks, since we had planned on stopping at the pubs along the way for our hot meals. The hotel arranged for a taxi to take us, in two trips, to the Chirk Marina. The taxi driver was amazed at how light we all packed. We only had one duffle bag or backpack for each of us, and the groceries. She told us that most people have huge bags the bring along. But, my worry was the lack of storage on the boat. I didn’t want all of us to be tripping over random suitcases. Smart move, actually. While there was quite a large box for suitcase storage under the kitchen table/extra bed, it wouldn’t have fit more that one hard-sided suitcase. But, we had no trouble with our duffle bags and back packs.

We had to wait about an hour before the gentleman was ready to check us into the boat and give us an orientation. We were also greeted by several boxes of champagne and caviar, which my husband surprised us with. It sounds like there was a lot, but it was really more packing materials keeping the champagne, and vodka safe from breakage. It was a very sweet gesture. We enjoyed one bottle of champagne a night.

Our orientation was comprised of locating all the important bits on the narrowboat: ignition, water intake, power buttons, cabin lights, head light, horn, toilet operation, shower pump operation, the grease screw, and how to clear the prop if it gets fouled with weeds. He then showed us the operation books that included how to work the canal locks and swing bridges, in addition to everything he had just covered. He also gave us words of advice and told us to have fun. We were handed off to another gentleman who maneuvered the boat out of the marina and instruction Rhonda and Aimee on how to steer the boat. The rest of us stayed out of the way and unpacked. He also gave us tips on mooring the boat and how to tie it off properly. All of us, except Lesley, have extensive boating experience: Michelle ran a marina in Colorado on Lake San Cristobal, Rhonda had owned various large sized cigarette-type boats, Aimee grew up waterskiing in Amarillo and spent time with me and my husband on our ski boat in Lake Travis. So, the only thing we were worried about was the sheer length of the boat, which was a whopping 69 feet, and maneuvering it properly. Once our orientation was completed, we drove for about 200 meters before our instructor said we were good to go and we bid him farewell as he jumped off onto the canal path to walk back to the marina. So we took our positions: three in the front and three in the back. We would end up swapping around periodically throughout the following days.

By the time we left the marina on our own it was around 4pm. So we were only going to travel a couple of hours before we were told to stop around 6pm near St. Martins, where it was recommended to go to The Keys Pub for dinner.

Within the first 45 minutes, we hit our first and only tunnel which we would have to come back through on the way back. Luckily, it was a straight shot into the tunnel. The whole idea is to make sure the tunnel is clear before heading in, turn on your headlight, honk you horn to let anyone on the other side know you have entered the tunnel and then just head through. We got through to then end just as another boat had arrived to go the opposite way into the tunnel. We greeted the same non speaking fisherman from the day before and wished him luck as we immediately had to cross the Chirk Aqueduct. The process is basically the same: make sure there isn’t anyone already on the aqueduct before venturing across, minus the headlight and horn.

So far, up to now, the canal has been fairly straight. However, there was a big left turn right after exiting the aqueduct. The only other issues were the small narrowing of the canal for bridges, tunnels, aqueducts, and other random narrowings for reasons we couldn’t quite figure out. Oh, yes, we did ram the sides of the canals quite hard a few times, but we were told that is quite common in the beginning and the hulls were plate steel, so we didn’t have to worry about turning into the Titanic. We actually got stuck at one point while moving off to the side to allow for another canal boat to pass us going the opposite direction. Getting unstuck took the whole team. We finally figured out that we had some barge poles, one short, and one long. So we grabbed the long one and took turns trying to get purchase on the side of the boat to push without actually falling in. The problem was that the side of the canal was covered in blackberry bushes which have huge thorns all over, so it’s not like we could just hop onto the side of the canal to push. Between the 6 of us, we finally got unstuck and I was pushing with the barge pole when we popped free. The barge pole slipped out of my hands and as I grabbed for it several times, it eluded my grasp and ended up in the water. UGH! We can’t leave it, we now have to back the boat up and try to grab the pole without getting stuck again. Luckily the second, short barge pole had a hook on the end. So, with Debbie and Michelle holding onto the waist of my shorts I had to lean over really far and snag the pole with the hook. I figured since I was the one that dropped the pole, it was my responsibility to retrieve it. Which I did. Whew!

We celebrated by popping open the first bottle of champagne. Debbie cut up a bunch of the fruit we had purchased earlier, and we added the blackberries we harvested while we were stuck. That would be the theme of our trip. One bottle of champagne in the evenings with our charcuterie boards of local delicious cheeses and fruit.

We came to our evening mooring spot, tied it off, locked it up and hiked up the road about a mile to the pub. We decided that the next pub stops would be right off the canal. We had and okay dinner. Not at all what we had expected, but it was food. And we had a couple of beers or ciders before we headed off back to the boat to try to figure out how to sleep in the very narrow beds. Rhonda and I converted the kitchen table to the extra bed with the very hard cushions and went to sleep.